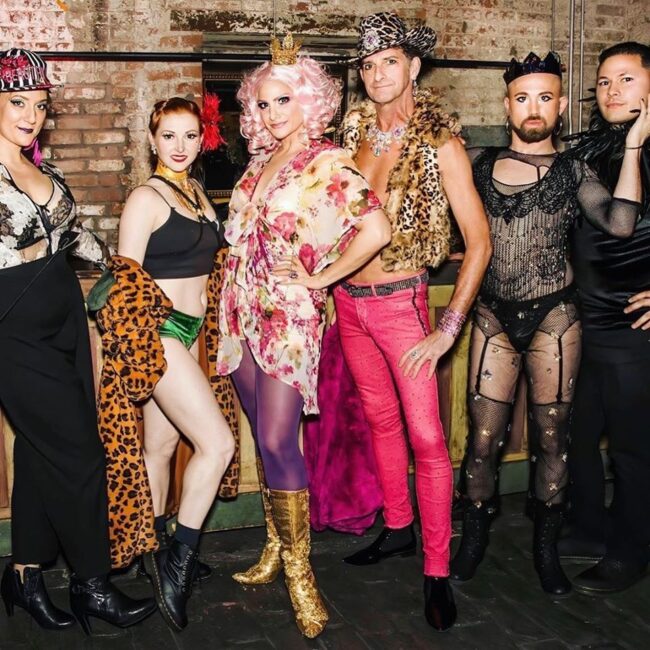 If you are looking for up to date info on the best gay and lesbian bars or clubs in New York City you will find it right here right here. Our local LGBT nightlife guide will also be taking a look at other subjects like mixed clubs, trans bars, drag shows, the West Village gayborhood, other queer areas near you and more!

We also have a bunch of annual and more frequent NYC pride events that definitely deserve a mention. And being that this is the 21st century we certainly won’t be leaving out the best LGBT dating sites which keep getting more popular by the day.

We all have our own personal style and preferences so we will list everything we can think of and let you choose your own adventure. You might also want to look at our other guides for cities around the Eastern US at that link.

Let’s start this off with a list of the best mixed LGBT bars and nightclubs in New York City:

Back in the day gay bars in New York City were pretty much strictly for men looking for men to hook up with. That has changed and now most places in your area are more mixed LGBT style, and as time goes on more are becoming mixed gay and straight.

Unfortunately there are not a lot of lesbian bars in New York City for women to meet women anymore. Many have closed down this century, and currently Ginger’s is probably your best option.

However women should be able to meet other women at plenty of other local LGBT hot spots around the West Village gayborhood and at other venues around the city.

Consider going to The Woods on Wednesday nights for their Misster all night lesbian dance parties, or see what the crowd is like at Boobie Trap in Brooklyn.

We aren’t really to the point of having full on trans bars in New York, but you can find drag shows that may help you locate ts near you at:

While we do know the scene here in NYC pretty well we cover way too many cities to have a more intimate knowledge on all of them than the local experts. Our goal is to keep our lists as fresh and current as possible but that can be difficult to keep up with.

Using the comments section to let us know if you notice anything dated would not only help us out it would help out all of our readers. Many of these gay or lesbian bars and clubs can be found in the LGBT nightlife area of  the West Village in Greenwich Village, Chelsea, and Hell’s Kitchen.

These gayborhoods should offer just about everything you need. We have also written:

And then there are a couple of big NYC pride and LGBT events held throughout the year:

We bet many of our younger readers don’t realize that finding LGBT people for dating or hook ups was like twenty years ago. If you didn’t want to go party at a local gay or lesbian bar you were kind of out of luck.

While we don’t really care whether you are ‘out’ or not there are likely some people reading this that may not be keen on the idea of having their photos taken at a gay bar and posted on social media. Even if you don’t mind we have some great resources to tell you about. Adult Friend Finder has been the biggest hook up site on the planet for almost two decades.

What some don’t know is that they don’t just have that site, they have quite a few different sites under the AFF network. Men Nation is their top site for finding gay men near you to hook up with and in a giant metropolis like this one you know it will have plenty of active users.

Lesbian Personals is where to go to find hot women near you to hook up with. Those who are bi-sexual and enjoy all types should just go with Adult Friend Finder.

That is where all of the people on all of the sites across their network can be found. Men Nation is where to go when you are ready to enjoy fast m4m hook ups and for f4f hook ups use Lesbian Personals.

Before we get out of here we also want to tell you about the biggest transgender dating site on the planet, MyTransgenderDate. Trans dating in New York is booming right now because so many sexy NYC ts are finally feeling like they have the freedom to be who they want to be.

Alright then, we have told you all about the New York City LGBT nightlife to the best of our abilities. You read about where to go to find mixed, gay, or lesbian bars and clubs in your area plus drag shows to party with trans, the West Village gayborhood and all sorts of LGBT dating sites. Now go out and have some fun.