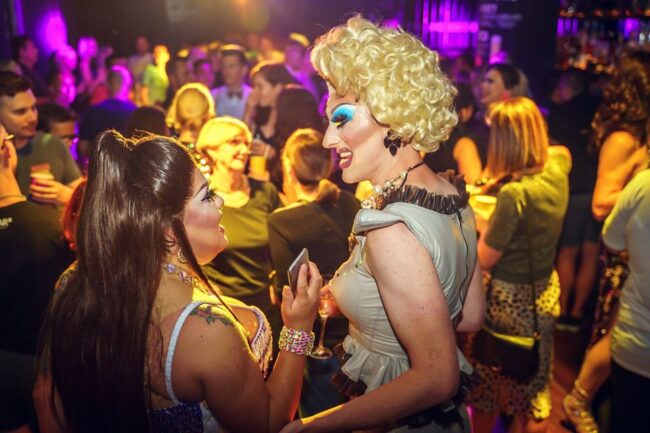 Welcome to our site everyone! If you are trying to find info on the best gay and lesbian bars or clubs in Sydney you will do so right here. Our local LGBT nightlife guide will also discuss topics like mixed clubs, trans bars, drag shows, the main gayborhood in town and more!

There are so many annual and more frequent pride events that we will be getting into. And being that this is the 21st century it would be weird if we didn’t mention the best LGBT dating sites in Australia which get more popular by the day.

We don’t all like to do things the same way and we know gay and lesbian bars in your area are not for everyone. Because of that we will tell you about everything we can think of and then you can proceed in whichever way sounds right for you.

Let’s start this off with a list of the best mixed LGBT bars and nightclubs in Sydney:

Poof Doof is a really fun LGBT party that goes down at The Ivy on Saturday nights.

Those of you that are here to learn more about gay bars and clubs in Sydney for men to meet men you can go off that main list we just posted. Back in the day lots of local gay bars in Australia weren’t all that inclusive, but currently most venues are pretty mixed and not only places for men to meet men.

Along those same lines we are not aware of any straight up lesbian bars in Sydney for women to meet women. You can go to the venues on the list we just posted, or you may need to head out to other nightclubs around town even if they are not known to be LGBT hot spots in your area.

We still don’t exactly have trans bars in Sydney but you can find drag shows that may help you locate ts near you at:

While we do know the gay scene in Australia pretty well we cover way too many cities to have a more intimate knowledge on all of them than the local experts. Our goal is to keep our lists as fresh and current as possible but that is easier than it sounds.

Using the comments section to let us know if you notice anything dated would not only help us out it would help out all of our readers. Many of these local gay or lesbian bars and clubs can be found in the LGBT area of Darlinghurst, and particularly along Oxford Street.

Darlinghurst isn’t a full on gayborhood per se, but there are definitely lots of places for you to have a good time around there. You may also want to read our other posts on:

As we said before there are tons of regular events here, though the Green Park Hotel closing over the pandemic did remove quite a few from that list. You also have all of these pride events plus other LGBT events throughout the year like:

As many of us become more introverted going out to party at a local LGBT bar or club may not be our preferred way to meet new people. Thankfully tech has opened up some new doors for us and now we have more options at are disposal than those in the past ever did.

We also do not know whether you are ‘out’ or not and some of you may not feel comfortable in a crowded bar at the moment. Whatever your reasons or motivations are LGBT dating sites are a great way to meet people near you without having to get all dressed up and head to a gay or lesbian bar.

We want to start off by telling you about a couple of sites that are part of the huge Adult Friend Finder network. We bet most of you have seen the AFF links online before since they have helped millions of people hook up this century.

Their best site to use to find gay men near you to hook up with is Men Nation and you might be pleasantly surprised at how many people are on it. The ladies will have more success on Lesbian Personals, the name pretty much says all you need to know about it.

Those who are bi-sexual and enjoy hooking up with all the colors of the rainbow can use Adult Friend Finder where you can contact all the people on their vast network. For fast m4m hook ups nothing out there is going to work better than Men Nation.

For f4f hook ups Lesbian Personals is going to be your top option. The last site we want to tell you about is the biggest transgender dating site in the world, MyTransgenderDate. Trans dating in Sydney is more popular than ever, just as it is all across Australia, and will only continue to grow as more ts feel confident enough to be the person they really want to be.

At this point we have covered the Sydney LGBT nightlife in full. You know all about the best mixed, gay, or lesbian bars and clubs in your area plus drag shows to party with trans and all sorts of LGBT dating sites in Australia. Now choose the best option for you and enjoy yourself.