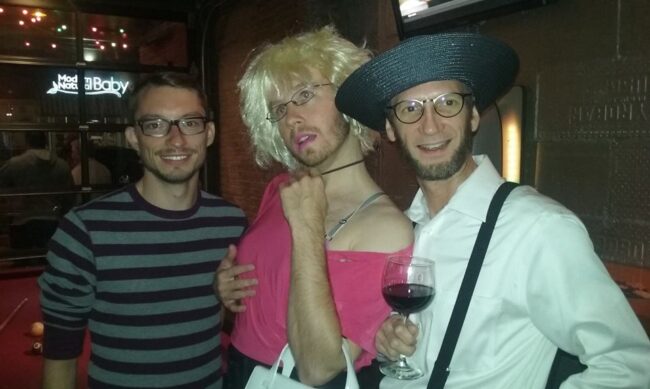 If you are trying to locate the best gay and lesbian bars or clubs in Detroit we have all the info you need right here. This local LGBT nightlife guide will also cover things like mixed clubs, trans bars, drag shows, the main queer area of town and more!

On top of that the best LGBT dating sites will be mentioned, particularly some sites for those who are more interested in hooking up than getting too deep into a serious relationship at the moment. Plus we will mention all of the best LGBT pride events and meet ups we know about in this city.

Not all of you will be interested in going out to a lesbian or gay bar or nightclub in your area to try and meet people near you so we will try to cover all the bases so that you can pick out which option you prefer. You can find more of our posts on the gay scene in the Midwest there.

Let’s start this off with a list of the best mixed LGBT bars and nightclubs in Detroit:

We used to live in a world where most gay bars in Detroit were only full of men looking for men to hook up with. These days things a lot more blurry and most venues are more mixed LGBT style, and some are mixed gay and straight. There will be plenty of men looking to hook up at the mixed venues we just listed.

Gigi’s and Stiletto’s in Inkster would have to be our top picks for lesbian bars in Detroit for women to meet women. However many of the spots on the above list will also work.

We aren’t really to the point of having full on trans bars in Detroit just yet, but you can find drag shows that may help you locate ts near you at:

You might also want to check out this great resource into the transgender scene in your area. Look guys, we cover way too many cities and these scenes change way too fast for us to be perfect. We know the scene here pretty well, but not as well as the people who live it every day.

It would be wonderful if you could let us know about anything we got incorrect or if anything is out of date on this page in the comments section at the end. Also, if you think any venues should be listed as solely places for men to meet men or women to meet women fill us in, thanks a lot.

Many of these gay or lesbian bars and clubs can be found in the LGBT nightlife area of Ferndale. Be sure to read through some of our other gay guides for:

Many of you are probably already fully aware of the Motor City Pride event held every summer.

We know that going out to a local LGBT bar or club is not for everyone. We don’t all enjoy the party scene, and these days many of us have become more and more introverted which is totally understandable.

It is also safe to say that we aren’t all in the same position and there are probably people reading this who may not want to have their photos taken at a gay bar. Plenty of us don’t mind, but we aren’t going to expect everyone to feel the same way as we do.

The first sites we want to mention are mainly geared towards casual sex, they aren’t exactly dating sites. Men Nation is a really good gay dating site for hook ups, and if you want to hook up with gay men in Detroit you should definitely check it out.

As the name suggests Lesbian Personals is for women to meet women for hook ups, and they are both run by Adult Friend Finder. You have probably seen AFF ads around the web since they have been helping people around the US hook up for almost as long as the internet has been around.

Men looking for other gay men near you to hook up with can use Men Nation to get the job done quickly. Women who want to meet lesbian women would be best off using Lesbian Personals, and those who are bi-sexual and like all types can check out Adult Friend Finder which covers all the user bases on their huge network.

Serious relationships aren’t for everyone and these sites are a great way to hook up for those that don’t enjoy partying in the LGBT bars, clubs, and nightlife. We also should mention the world’s top transgender dating site, MyTransgenderDate.

Trans dating in Detroit is trending upwards at a rapid rate as more ts near you are finally comfortable living the life they want to live. Alright then, we have told you all about the Detroit LGBT nightlife as best as we can.

You know where to go to find mixed, gay, or lesbian bars and clubs in your area plus drag shows to party with trans and all sorts of LGBT dating sites to try and get started now. We hope you make the most of the information at hand.